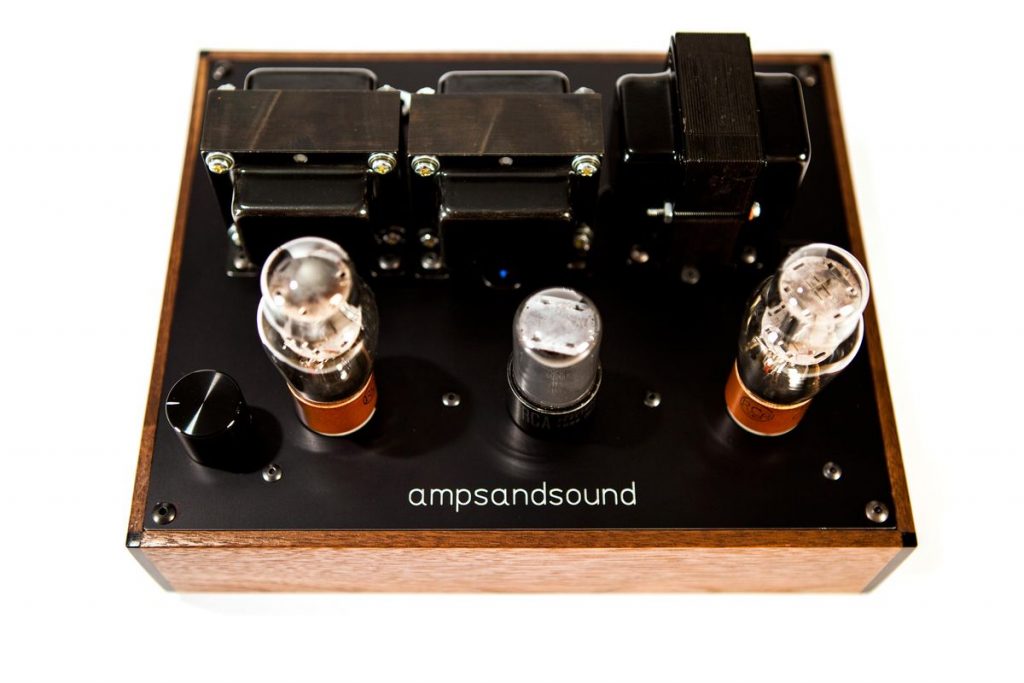 Justin Weber is the man behind production of these amplifiers. AmpsandSound gear is somewhat hobbyist in appearance, versus say Devialet, Chord, or larger commercial ventures. The metal top plate of the amp is adorned with a silk screened metal plate that covers the top, which is complemented by side and bottom panels of well finished wood. The Kenzie uses a 12SL7 (NOS available for around $8) or equivalent tube at its input. The output tubes are either 1626 or VT-137 tubes (replacements are available for between $5-$15).

I am unfamiliar with all of these tubes, but the ability to roll tubes might be very attractive given their prices. Justin suggests you can expect up to forty years performance out of the tubes as they're used—of course, that may be altered by a random tube failure, but at the cost of replacement tubes, that would not be a consideration for me.

My sample provided 16 and 32Ohm connections (now it is offered at 23/300Ohm output impedance) at the back of the unit, with a smooth, even tracking volume pot near the front, left of the amplifier. 32 Ohm connections deliver 250m Watts RMS. I've lost the specifications for the 16Ohm outputs. The Kenzie can also be configured, in a separate offering, as an integrated amplifier.

The power on offer for my reference and the Aeon Flow headphones was always sufficient. I rarely turned the dial past ten o'clock. Justin says he follows an Italian style of production, which is to say, good parts with a good design will yield a sound. His design mantra is to create good components made well, no intention to shape the sound. You'll like the Kenzie, or you may prefer a different style, hence different models in his lineup.

Although there were slight differences between the 16 and 32Ohm connections, I can't say I had a distinct preference. Both sounded good. I had no functional issues throughout my use of the Kenzie. The tubes operated without issue, though as can be expected from time to time with tubes in the circuit, there was some tube noise, in the familiar roar. I note it for the edification of people considering any tube product, but I did not find the tube noise to impair my enjoyment. With the 92dB efficient Aeon Flows, the volume did not need raising, or at least for me.

The Kenzie was easily preferable to Schiit's Vali, but at nine times the premium... is that news? The presentation with either my reference or the Aeon Flow headphones was even handed. If you're looking for a classically "tubey" distortion... look elsewhere. The sound was smooth and extended in the treble range. The same held for bass reproduction, especially with the Infected Mushroom tracks I tried. Male and female vocals were at their best with the Kenzie in place. Where praise was given previously, it's the Kenzie that allowed the performance to reach its zenith in my system. If it were strictly a performance comparison, I can't imagine anyone choosing the Schiit Vali over the Kenzie. But, since paying for things can be an issue, price would be the primary, if not the only, reason to purchase the Vali.

At the end of my long-winded babbling, I engaged in the question of whether a $620 nipped at the heels of one costing $3900. And my answer is no. The far pricier gear was unfortunately preferable. My reference setup serves its purpose and is a way to listen to music. Still, it's a big step up from sound out of my computer, and there is no "magic" with it, just good sound. Inserting MrSpeakers Aeon Flow open headphones let me glimpse what my reference two channel setup provides. It's also more comfortable than my AKG 702 headphones, and so it's a double whammy of improvement. The Gumby is a winner that would be at home in a headphone setup, or in my far more costly two channel setup. But for life exigencies, I'd have bought the Gumby. And, it's clear AmpsandSounds' Kenzie closes the loop and allows for a thoroughly satisfying sound. Whether the Aeon Flows or the Gumby should be the first place to upgrade my system, I'm not sure. All three products here are very good performers and are recommended without hesitation.

Comments will be approved before showing up.